The gilt-leather wall hanging from the mayor’s chamber in the Maastricht town hall represents a so-called Chinoiserie, an imaginary landscape setting inspired by Chinese and Japanese designs. Worldwide, this ensemble can be regarded as one of the very view still preserved in its original setting.

The wall hangings are covered with a dark layer of surface dirt and non-original varnishes, which have discoloured over time. Also the tension of the individual pieces is insufficient and will have to be improved by adding a new stretching system on the back.

The hand-painted leather wall hanging was designed for the mayor’s room and commissioned by mayor Van Slijpe. In 1737 a London based gilt leather studio began with the manufacture of the wall hangings. One year later the ensemble was installed in Maastricht. The total costs for the 66 m2 meters decorated leather were about 1200 Dutch guilders.

'Gilt-leather’ can be described  as consisting of calf leather skin cut into rectangular pieces, which are then covered with a layer of silver leaf. On top of the silver a transparent lacquer with a yellow tint was applied in order to imitate real gold leaf. Three dimensional reliefs were pressed into the surface using wooden molds. With metal punches small decorative motives were driven into the top layers. Finally, using oil paint, colourful repetitive patterns were added on top. Sometimes these painted details were varnished locally. In this way vivid differences in gloss were achieved resulting in a sophisticated reflective surface, especially when lit using candles or oil lamps.

The Maastricht gilt leather wall hanging is very special in the sense that it does not have a relief, nor punch marks or repetitive motives. The wall hanging consists of large sheets of leather composed of many skins that were glued together. On the gilt leather support, a wall-filling Oriental fantasy landscape is depicted. Unfortunately in the 1960’s these large sheets were cut into vertical strips.

In 2014 the Stichting Restauratie Atelier Limburg examined one of these strips. The aim of this examination was to indentify the materials and techniques employed as well as to test different conservation methodologies to tackle the structural and esthetical problems. Based on this pilot restoration, a comprehensive treatment strategy for the whole room could be designed. 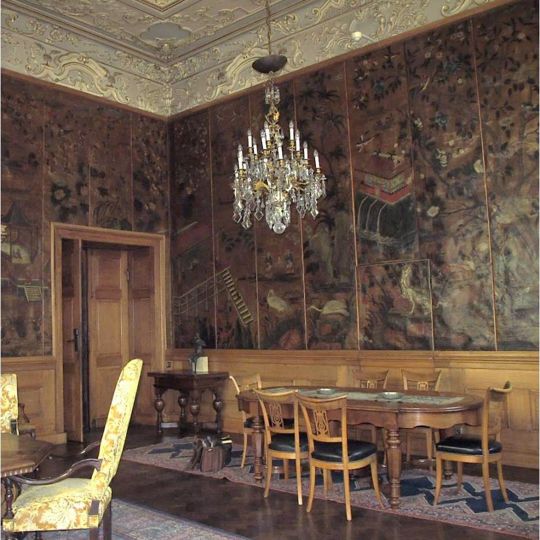 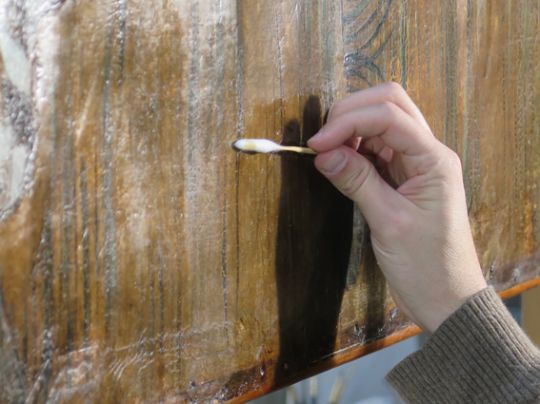